The Stages of Embryo Development

A successful pregnancy goes through several distinct stages. A man’s sperm must reach, penetrate, and fertilize a woman’s egg. The resulting zygote must divide and form a blastocyst. The blastocyst much reach the uterus and implant in the endometrium. The implanted blastocyst continues its development into an embryo and then a fetus.

At any point in this process problems can occur that interfere with a successful pregnancy.

Fertilization is the union of the female gamete (egg) and the male gamete (spermatozoa). Whether it occurs naturally inside the female reproductive system or with the assistance of reproductive technologies outside of the human body, the product is a structure called a zygote.

When a woman is ovulating she releases one egg into her Fallopian tubes (or more in the case of fraternal twins). During this time, a woman’s cervical mucus will thin, in preparation for sperm to pass through more effectively.

Following spermatozoa ejaculation inside the vagina, special secretions help them to swim through the cervix towards the uterine tube where fertilization takes place within 24-72h.

The fertilized egg or zygote then begins to move toward the uterus, as the cells divide into the next stage, a blastocyst.

There are a wide range of problems that can prevent fertilization, but they all have the same outcome. Something is stopping sperm and egg from reaching each other.

Absence of Sperm/Egg: If a woman has an annovulatory cycle where she doesn’t release an egg, or if no sperm reaches the egg because of azoospermia or low sperm count, then fertilization will not occur.

Sperm’s Ability to Reach the Egg: Poor sperm motility or movement, or poor chemotaxis (sperms ability to navigate toward the egg) can cause problems. Similarly, if a woman’s cervical mucus does not thin enough during ovulation, it may not let sperm reach the egg.

Sperm Penetration: Poor morphology, abnormal sperm shape makes it harder to penetrate an egg. Sperm also relies on a chemical reaction, called an acrosome reaction, that helps it create a hole in the egg to pass through. Poor or incomplete acrosome reaction could also inhibit fertilization.

Soon after fertilization, the embryo is created from a small group of cells that are constantly dividing inside of a complex structure called the blastocyst. It is formed by two groups of cells, inner and outer cells, and fluids. The blastocyst stays inside a protective cover during maturation called zona pellucida, which could be described as an egg shell. The outer cells are located right below this cover, which will create the future placenta and surrounding tissues to support fetal development in the uterus. The inner cells of the blastocyst will become the different tissues and organs of the human body, such as bones, muscles, skin, liver, and heart.

The cells within the blastocyst grow fast, they go through many changes and convert into more specialized cells, making the structure very tight. In humans, these changes happen during the first few days of development, before the implantation in the uterus. At this stage, the zona pellucida (similar to an egg shell) breaks and releases the blastocyst. It moves through the Fallopian tubes towards the uterus and implants around day ten.

Blastocyst arrest is the term for when the cells fail to divide stopping the developmental progress of the embryo. While the exact causes of blastocyst arrest are not fully understood, they are typically related to genetic abnormalities in the sperm or egg.

When the blastocyst reaches the uterus it implants in the endometrium, the mucus membrane which lines the uterus. The external cells of the blastocyst and the uterine inner lining, together, will create the future placenta. The placenta is a structure that transfers nutrients to the baby and removes his/her wastes.

When a fertilized egg is able to implant in the uterus but fails to develop it can be described as an empty gestational sac or “blighted ovum”. It often occurs due to the presence of abnormalities in the chromosomes of the sperm, the ovum or the fertilized egg or cell division. This event may happen in the early days of pregnancy.

Sometimes, a fertilized egg will not implant in the uterus. There is scientific evidence that the endometrium is responsible for the selection of the embryo before facilitating the implantation. This mechanism eventually results in implantation of healthy embryos or rejection of abnormal embryos. Some human embryos have alterations in their genes called mutations that can delay or obstruct normal development. These impairments make them inappropriate for natural implantation and will increase the likelihood for miscarriage.

As the blastocyst reaches the final steps in the implantation process into the inner lining of the uterus, it evolves into a structure called an embryo. This is the time when internal organs and external structures develop. The mouth, lower jaw, throat are emerging, while the blood circulation system starts its evolution and a heart tube is created. The ears arise and arms, legs, fingers, toes, and eyes are being shaped. The brain and the spinal cord are already formed, while the digestive tract and sensory organs start their development. The first bones are replacing the cartilage.

After ten-twelve weeks of pregnancy, the embryo moves into the final stage of development, a fetus.

Severe problems with embryonic development can occur as early as the first 3 weeks.

With so many internal organ systems and external structures beginning specialization and development in the embryo, the developing organism is particularly sensitive to damage from genetic abnormalities and environmental exposures. These genetic abnormalities can range from spontaneous genetic mutations, to improper chromosome arrangement that can potentially affect the development of important structures like the heart or brain.

Alongside genetic abnormalities, any number of environmental factors (malnutrition, infections, disease, toxic exposures) can have an effect on genetic expression potentially proving to be lethal to the developing embryo.

By the twelfth week of fertilization the embryo moves into the final stage of development called the fetal stage. By now, the fetus has formed all of the organs and structures necessary for a baby, but those organs still need to grow and develop.

At three months of pregnancy, the upper and lower extremities of the fetus are completely developed. Ears and teeth are formed and the reproductive organs have evolved. At the end of this month, the fetus has completed the expansion of most of the circulatory and urinary systems and its length is about 5 inches.

At six months, the fetus can respond to sounds and is around 12 inches long. The fetus continues to develop and grow changing position and responding to sounds, and stimuli. The length of the little body can reach 14 inches.

The fetus becomes a baby at month eight. The brain is evolving quickly so the baby can see and hear, although the respiratory system requires maturation. The baby can weigh approximately 5 pounds. Close to the end of the pregnancy at month 9, the baby responds to stimuli, can move the whole body but space around the new human being is becoming too tight.

If the baby had not changed his/her position inside the uterus, this is the right time to drop down into the pelvis towards the birth canal to face the world.

Because all major structures are already formed in the fetus, the fetus is not as sensitive as the embryo to damage from environmental exposures. This is why after the first trimester, a miscarriage is much less likely. However, toxic environmental exposures can contribute to physiological abnormalities or minor congenital malformations. 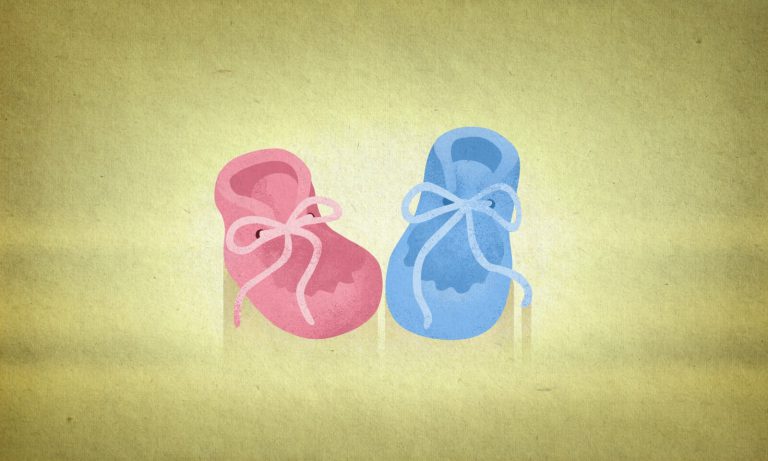 IVF Sex Selection: How Does it Work?

by Kristin Brogaard, PhD
Previous
Does Marijuana Cause Infertility?
Next
What is IVF Assisted Hatching?